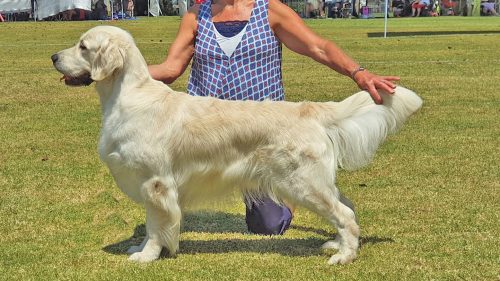 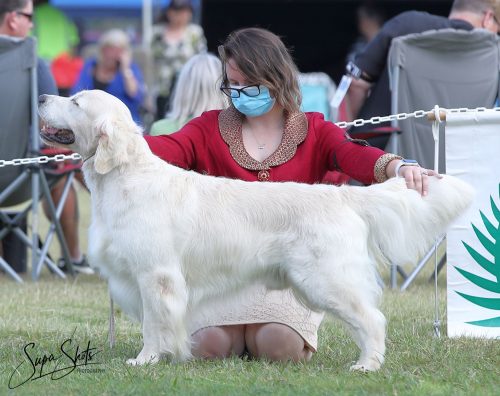 Ch Sandlewood Runa Mile In M’Shus – 5 years old. Beautifully balanced front and rear. Dead level
topline which he maintained on the move. Short coupled, In full coat. Beautifully presented and handled.
Not exaggerated in any way. Delighted to give him Best Dog and BIS. Also interesting to note that he is
the son of Ch Sandlewood Ivy’s a Gamble who I gave BIS to when I judged the SGRC Golden Specialty a
few years ago. 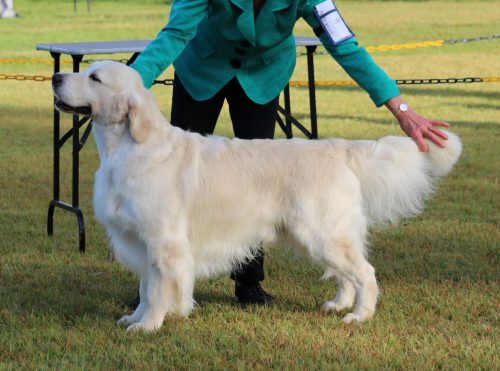 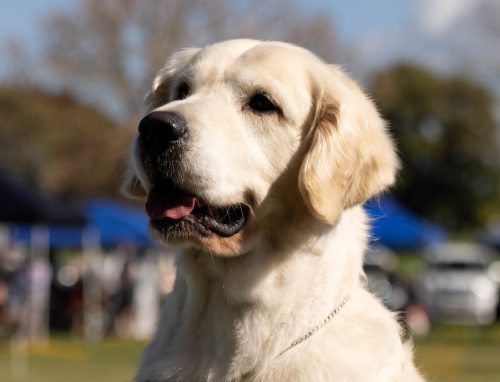 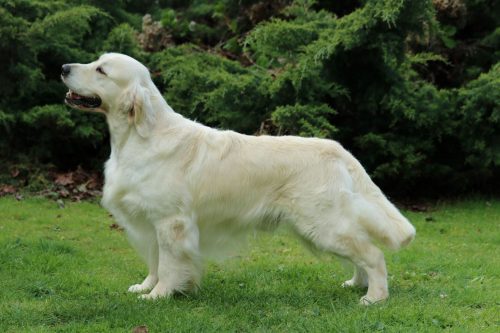 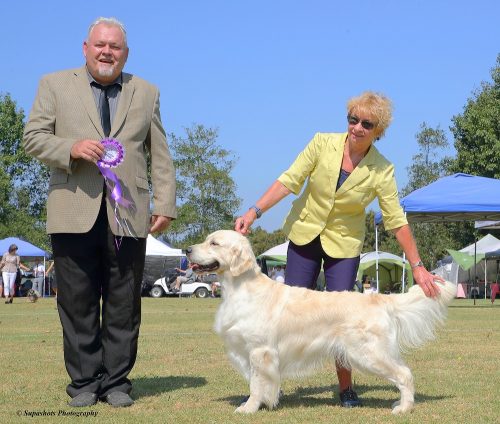 On the move for Best In Show 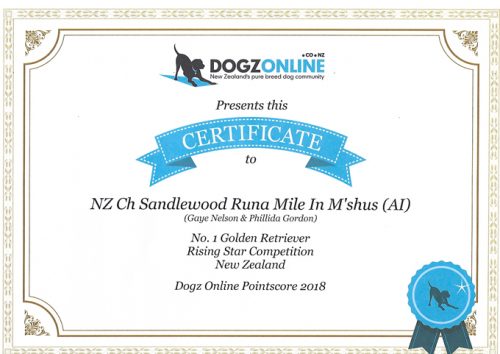 JUNIOR DOG 1 Sandlewood Runa Mile in M’Shus (AI) G Nelson & P Gordon
Seventeen month cream. Scopey lad. Impresses at first glance, yet to body up, as it should be at this age. Displays a pleasant outline with good proportions. Well balanced head and muzzle, correct bite, dark eye, rather soulful expression and good pigment. A good layback enables a smooth sweep of neck into his strong topline. Adequate forechest for his age. Well-knit body. Strong straight limbs down to tight feet. Well-turned stifles and strong hindquarters, which he used on the move. Still to coat up, but the texture is correct. He moved smoothly and effortlessly around the ring, good reach and drive, strong topline and happy outgoing nature. A workmanlike dog, with good ring presence. I think he will be one to watch for the future.

and at the PM Show Milo wins

1st Sandlewood Runa Mile In M’Shus Really fell for this chap, pale boy shown in hard fit condition, love his height/length ratio. Stands on the very best of legs and feet. Moves true with good side action, excellent head carriage. Covers his ground with a long, easy stride. Nice head, a dog that knows he is special and commands attention. Shown in good coat and condition. Balanced angulation fore and aft with super front assembly. Handled and presented to advantage. Croup may be a little short but even on the best no one is perfect. Perfect level of maturity for his age. RESERVE BEST IN SHOW, DCC, JUNIOR IN SHOW

JUNIOR DOG
1st SANDLEWOOD RUNA MILE IN M’SHUS – G Nelson & P Gordon. My star of the day, Very eye-catching young pale gold boy who appealed a lot for his overall balanced body, correct length of leg to length of body ratio, masculine head with a dark eye and pigment, good skull and stop, strong neck of good length, short coupled loin, well sprung ribs, stands on strong well boned legs with correct cat-like feet, moves well holding a lovely shape and hard to take your eyes off him, carries his tail level with his back, very nicely presented and handled, would imagine he still has his best to come as still young at only 18 months old, could have took him home with me, delighted to award him best dog and best in show 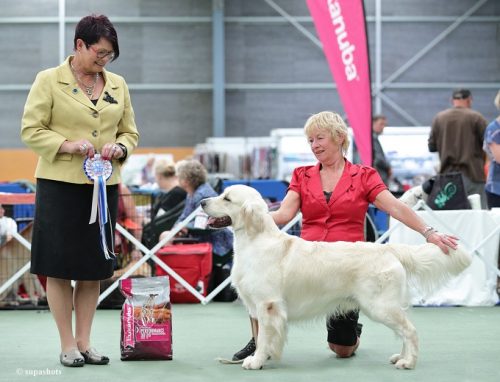 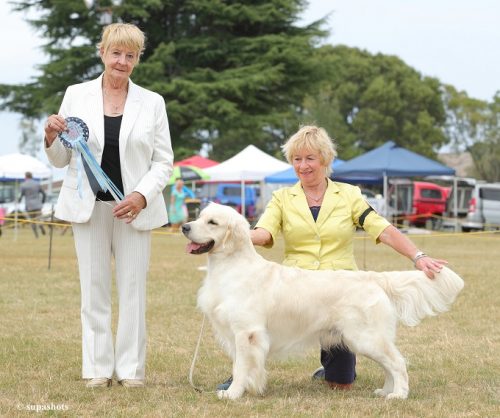 Milo 23 months winning Best Of Breed and Junior of Group 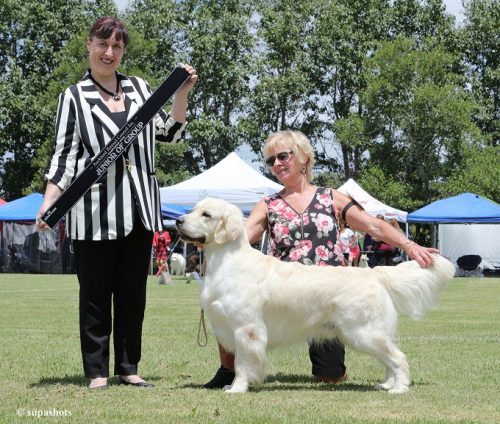 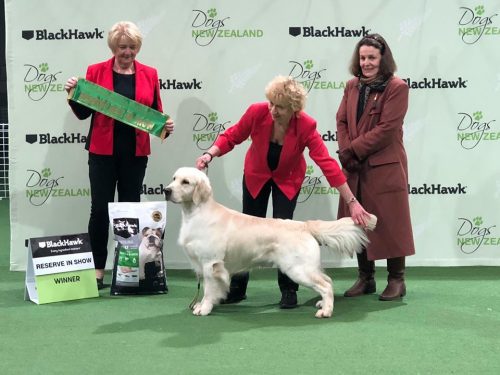 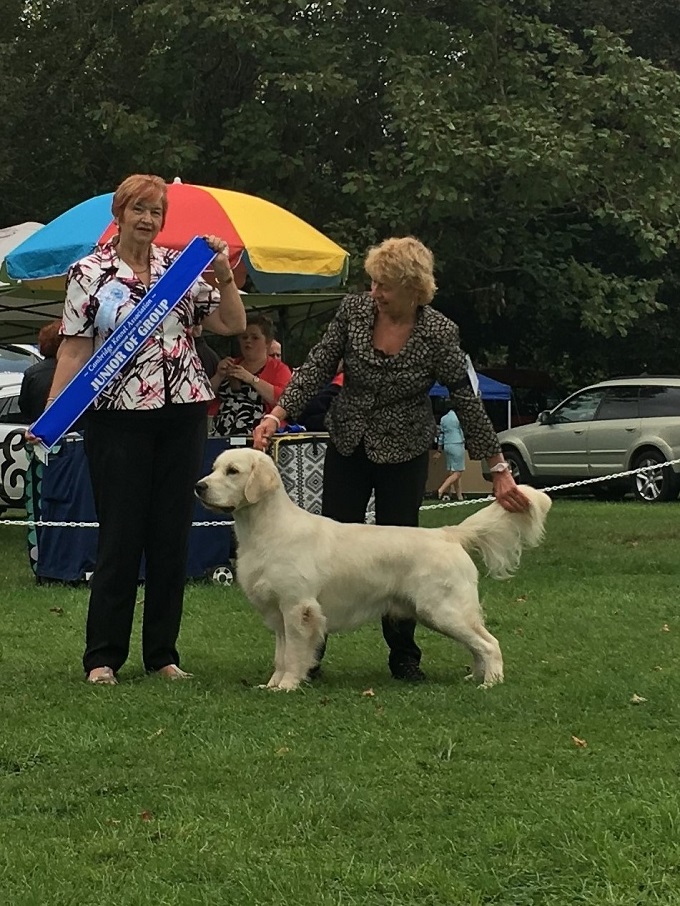 Milo winning Puppy Of Group at his last
Show in Puppy 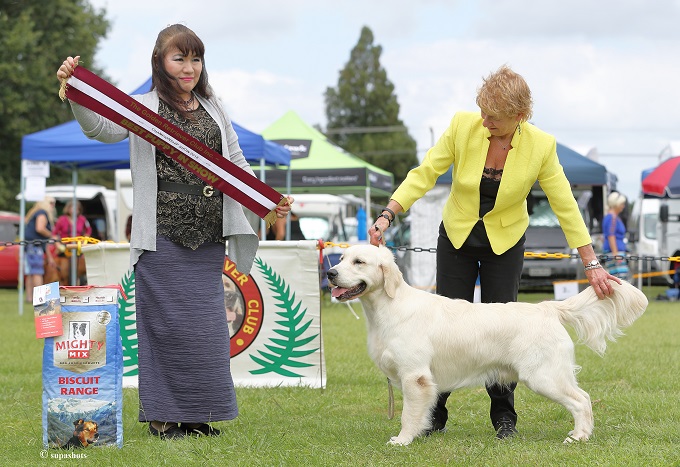 Milo 10 months winning Best Of Breed and Puppy of
Group 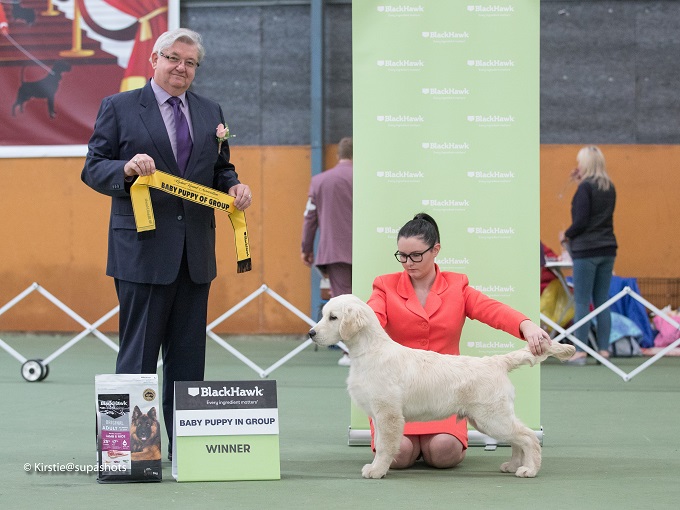